The Nile crocodile (Crocodylus niloticus) is native to the African continent, mostly in the central, southern and eastern areas. Its average size ranges from 13-15 feet with the longest of the species reaching lengths of up to 26 feet. Around 200,000 Nile crocodiles are farmed annually. 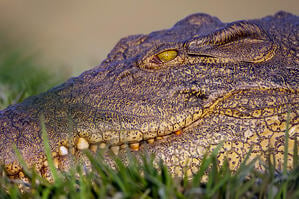 The Nile Crocodile’s skin  is often compared to the American alligator because of its low bone content. It is relatively long compared to its width and it has a particularly long, narrow tail.

One of the very distinct features of the skin is the tiny follicle on each of its individual scales.
The scales on this croc are very large and more square than round towards the corners of the tiles.

As one of the premier textures on the market and a top-tier alternative to American alligator skin at a slightly lower price, the Nile crocodile presents a unique set of features for your upcoming designs. And we look forward to supplying the hide to you. For more on how to use Nile crocodile in your next leather project,

The bags use the most beautiful belly of the leather piece, the leather pattern from the nile crocodile is square, wide and very evenly on the sides, making them always symmetrical.
The ingenuity of the craftsman right from the selection of raw materials will bring the most perfect experience for the user

The purses made from this leather line are also extremely luxurious, sophisticated, and extremely perfect in both functionality and durability. The belts are also completely handcrafted from nile crocodile leather

We make the tools ourselves Factory owners are skilled, talented people. Any tool that doesn’t like its quality or aesthetics, he makes it himself for the production of handcrafted leather goods, tools that are often adored and appreciated by other leather artists.

some stuff he makes